Built in 1774, Timber Post is a historic colonial set on over two grassy acres of rolling farmland in quaint Hollis, New Hampshire. Removed from the hustle-and-bustle, yet conveniently located just six miles from downtown Nashua, 25 minutes to Boston-Manchester Airport, and less than an hour to Boston, Timber Post is suitable for both  business and leisure travel.

Low-key and unpretentious, the property allows you to feel like yourself and leave the rest of the world behind. The entrance is via an enclosed garden, with a curved brick walk, water fountains, and a canopy of trees.

Upstairs are four bright guestrooms each with their own character. The largest room features a fireplace surrounded by built-in cabinetry, and adjoins the smallest room, making it perfect for groups or families who wish to stay together, yet have separate quarters.

Vivian Girard grew up in Lowell, MA, then moved to the Greater Nashua/Lowell area where she bought a condo in Kessler Farms in North Nashua, then moved into a house next to Kessler Farms in 2004. She holds a bachelor's degree in business management from Southern New Hampshire University. Prior to opening Timber Post, Vivian spent over 18 years working as a buyer/planner for local high-tech manufacturing companies including Brooks Automation, Flir Systems, BAE Systems, Lucent Technologies, and other smaller companies. She cares for her mother and children while running Timber Post.

Vivian is a sole woman-owned business owner. She have two daughters, Chloe and Genevieve.

After two genealogy trips that visited the B&B, and a close friend/relative in town, Vivian learned that she's related to the Hardy Family through Charles Hardy(born 1808). Timber Post was called the "Hardyhurst," which was another name for the house back then.

While traveling I always prefer to stay in B&Bs or small hotels. This became difficult to do after having children since many B&Bs do not allow children.

After a short overnight trip to Maine in September 2013, I was inspired by an innkeeper who single-handedly managed a small B&B in her antique colonial. Also at this time I was dissatisfied with corporate desk-work and longed to find a new occupation where I could be in charge of my own destiny and also work from home. On the drive back from Maine I had the “wouldn’t it be cool to do that” daydream.

On a whim, I decided to look at a pair of antique houses I found on the internet. One of them was located at 162 Broad Street in Hollis.I immediately saw the potential for this old house.

The Nashua house was put up for sale, business plans were hastily written, markets were researched, books were read, calls were made, meetings attended, and much sleep was lost. In late April 2014, I formed Timber Post B&B LLC and moved in with a clear vision of the future. With passion and gusto I immediately began improvements to make Timber Post B&B a reality. This made it easier for me to be a care giver for my girls and my elderly parents.

On July 27, 2018,Timber Post went from being a small at-home business to officially a small woman-owned business, increasing our capacity up to 16 guests. 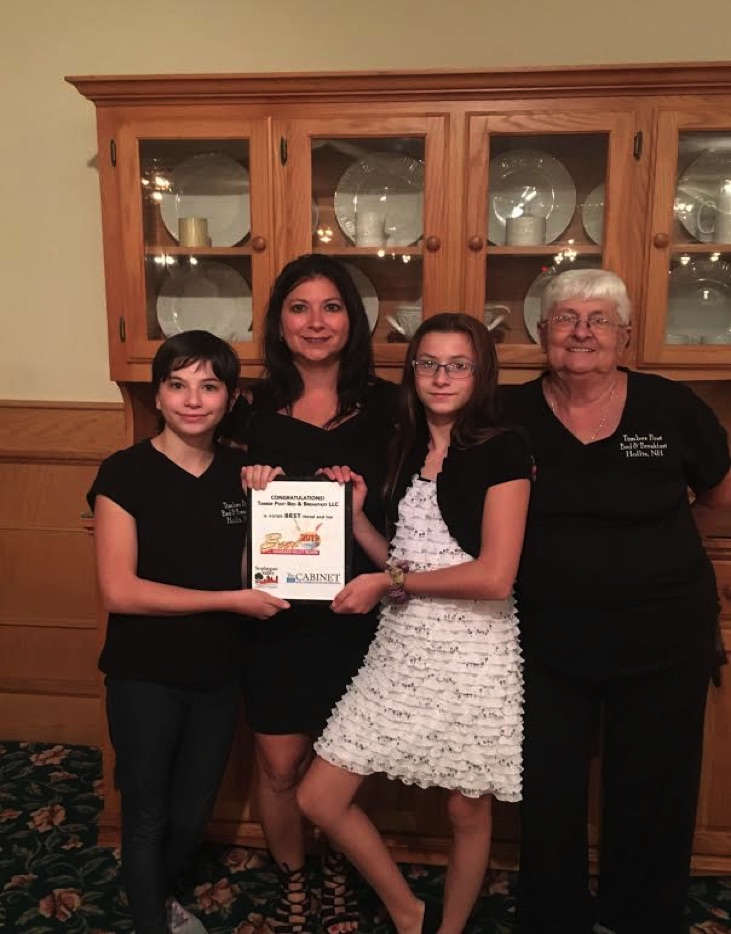